MUNSTER HOOKER DIARMUID Barron comes from a family steeped in the GAA but none of the family from Tipperary managed to score at Páirc Uí Chaoimh until he touched down against South Africa XV a couple of weeks ago.

His dad Kevin, a Sigerson Cup winner with UCD in 1978. played senior football for Tipperary for five years, lining out against eventual All-Ireland champions Kerry in the 1984 Munster semi-final, and he went on to play for the Tipp junior team for several more years after that.

Diarmuid grew up becoming the fourth generation of Barrons to play for Rockwell Rovers, lining out in Semple Stadium in an U-12 Tipperary county hurling final in a team managed by his father.

“I suppose in terms of my aspirations, first of all it would have been to try to play football for Tipp and I probably spent up until 14 or 15 trying to do it — but I was way off it! It was an aspiration anyway.”

The Cashel native went to nearby Rockwell College and his rugby career took off, winning a Munster Senior Cup medal in 2015 when current Muster defense coach Denis Leamy was part of the coaching team.

Barron came through the Munster academy and made his senior debut in the PRO14 against Cardiff in September 2018 and the hooker has since chalked up 40 appearances.

His score against the South Africans was his fourth try for Munster and came either side of playing for Emerging Ireland in Bloemfontein and Ireland A against an All Blacks selection. 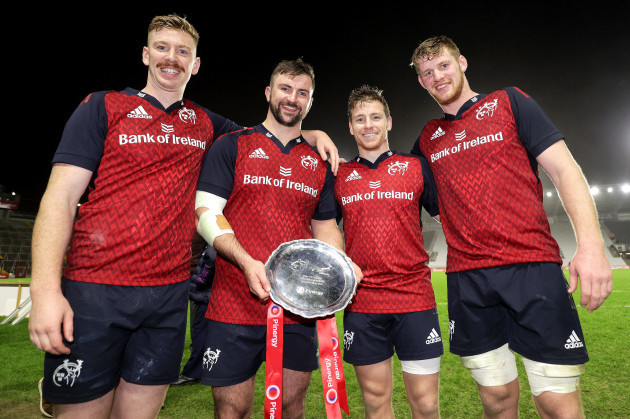 But the match against South Africa which he crowned with their third try in a 28-14 win in front of the biggest crowd to attend a rugby match in Munster, will always be special for Barron as he scored in front of 41,400 at the Blackrock end at Cork GAA’s headquarters.

“It was class. It was a great day. I never played there before. I was down there before on the wrong end of a few results alright,” added the 24-year old.

“We have a huge challenge and we are not shying away from that. But all we can do is look after ourselves and keep growing on our performances, take momentum from I suppose a couple of good performances recently and try and do the best we can and then look to build that momentum even more so.

“You can see it week by week, it’s coming together more and more and it’s just important we keep building on that momentum more and more, keep pushing ourselves to keep learning every week.

“We can take a lot from the South Africa game. We can take confidence first of all, in what we’re doing and trying to accomplish. And then we can take solace in the fact we went toe to toe with a big pack, and physically did very well. There’s a lot of work-ons too, and it was far from perfect, but it was a class night, there’s no hiding away from how good it was.

“It’s exciting going into the next block, the lads have used the term ‘re-energised’, and I think a lot of lads would be re-energised from that, and it’s very exciting.”