WALES BOSS WAYNE Pivac is under pressure following last weekend’s first-ever defeat to Georgia, which came a few months after a shock home loss to Italy in the Six Nations.

The national team’s struggles are clear but the problems in Welsh rugby run much deeper.

On today’s edition of The42 Rugby Weekly Extra – a podcast available to members of The42 every Monday and Wednesday – Welsh rugby journalist Steffan Thomas laid bare the extent of the issues in the game there.

Among the problems Thomas highlighted is how the WRU and the four Welsh regions, the Scarlets, Ospreys, Dragons and Cardiff, cannot nail down an agreement for a long-term financial model, meaning player recruitment and contracting is currently frozen.

“The top-end internationals obviously know subconsciously that they’re going to have contracts because they’re Lions, etc. but there are a lot of players at the regions who don’t know if they’re going to be professional rugby players next season,” explained Thomas.

“The regions just aren’t able to plan because they don’t know their playing budgets, they can’t sign players, they can’t retain players. It’s just a mess. How can you possibly have plans to be successful when that sort of thing is going on in the background?

“During the height of the Gatland era, a lot of people were saying – because the regions weren’t great then – that unless the WRU really invested in them, that the national team would eventually go downhill. We’re at that stage now and there’s a lack of leadership.

“You’ve also got the situation where there isn’t enough money in Wales for four professional teams. I think there’s going to have to be a harsh decision to be made. There were recommendations to the WRU which suggested they should cut to three teams. I wouldn’t like to see that but I don’t think Wales has enough top-quality players anymore or enough money to sustain four fully-functioning professional teams.

“The game in Wales at the moment is in a difficult place.” 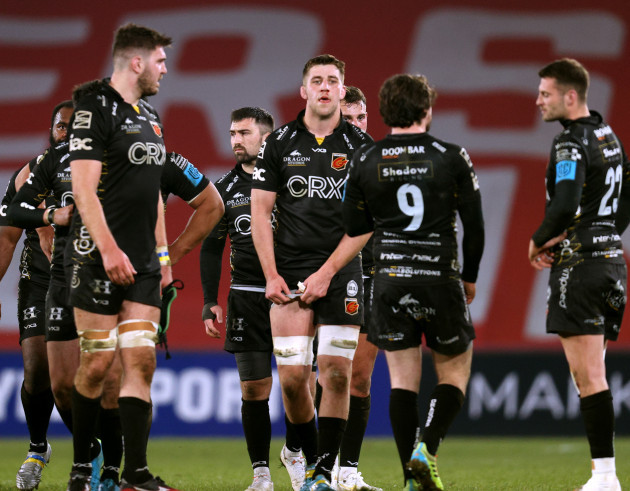 The Welsh regions are struggling.

Already, some players are making plans outside of rugby for the end of the season.

“I spoke to one player the other day who has a job lined up away from the game, a run-of-the-mill job, because he doesn’t know whether he’s going to have a contract next season or not,” said Thomas.

“It’s not great for the top internationals either, but they know they’re going to get something because they’re top players, even if it’s outside Wales. But for other players, maybe fringe internationals, it’s going to be really tough.

“If you’re a regional squad player and you don’t know whether you’re going to have a job next year, it’s going to affect your performance. If you’re working in an office and know there’s a host of redundancies coming, it would be naive and daft to think that’s not going to affect the way you perform in work.

“The regions are desperate to get a deal done but it just seems the WRU are dragging their heels. You talk to people in the union and there’s no desperation or urgency. How can you tell a player you’re going to take time to do this?

“Rugby is a short career, you don’t get paid big bucks like football. They’ve got to put food on the table, feed their families. The whole situation is a disgrace and I’m sorry to use tough language like that but it’s the only thing I can use.

“The game in Wales is in a really tough position and they’re running out of time to get things right because of the rise of football.”

In a wide-ranging discussion on today’s episode of Rugby Weekly Extra, host Murray Kinsella and Thomas also discussed the pressure on Wales boss Pivac and the suggestions that Warren Gatland could return before the World Cup.

The lads also got into the governance of the WRU, what Welsh rugby fans really think of the URC, and the health of the domestic club game in Wales.

To get access to The42 Rugby Weekly Extra, which comes out every Monday with Gavan Casey, Bernard Jackman, and Murray Kinsella, as well as every Wednesday with Eoin Toolan, become a member of The42 at members.the42.ie.