THE CURTAIN WAS only just coming down on an excellent 2022 for Ireland and they were already glancing ahead to bigger challenges to come.

This autumn window featured a superb performance to beat the world champions Springboks in an incredibly physical game, a scrappy win over Fiji, and a narrow victory against the Wallabies on Saturday night when Andy Farrell’s men made frustrating errors but defended strongly.

In the 2022 Six Nations, Ireland scooped a Triple Crown, then they went to New Zealand in the summer and made history. It has been a very pleasing year for Farrell’s team but their sense is that bigger and better things are ahead with the Six Nations and World Cup to come next year.

“It’s about keeping that momentum going,” said prop Andrew Porter on Saturday night. “It’s great to get a couple of wins but at the end of the day, there was no trophy in this November series. We want to play for trophies and the Six Nations is coming up fairly quick.

“That’s what we’re focusing on now and it’s great to have that momentum but also get different combinations out there and also to see Joe McCarthy making his debut today and Jack Crowley getting his first start at Test level.

“It’s incredibly positive to see these players come in and play well, do their families and themselves proud. It’s about building momentum for the Six Nations now and winning trophies.”

Farrell will be honest with himself and his players when he goes through this autumn campaign with a fine-tooth comb. Ireland’s discipline slipped against Fiji and Australia, while both those games also featured serious wastefulness in the opposition 22. 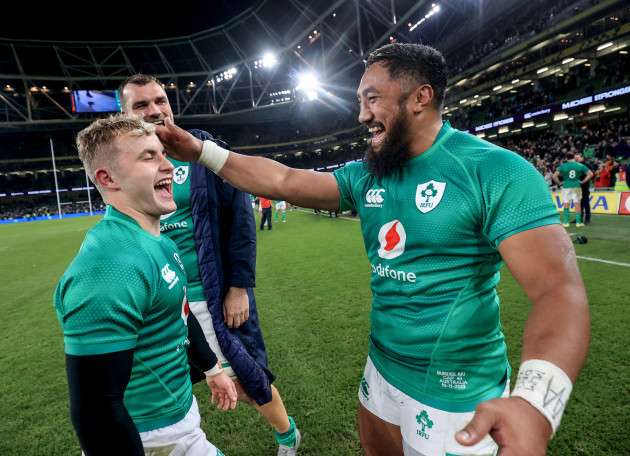 But the Ireland boss welcomed the various challenges that this window brought. He thinks it’s a good thing that injuries struck and tested his squad, even the very late one for Johnny Sexton last weekend that catapulted Jack Crowley into the starting team and match-winner Ross Byrne onto the bench.

Farrell’s team were far from perfect and while they may retain their number-one ranking, they believe that there’s much more to come in terms of performance.

“We certainly didn’t peak today! Or last week!” said Farrell on Saturday with a smile when asked about Ireland being able to kick on again in 2023, rather than fading like the last World Cup cycle.

Even the frustrating manner of the Australia game was something Farrell seemed pleased about.

“If we’d lost, it would still be good for us,” he said. “It was still good for us to go through that type of rigmarole and to be in with a chance of winning a Test match against a pretty good side, in my opinion.

“We’re embracing the fact that people are going to come here and be at their best, a lot better than what we’ve faced before. Australia had nothing to lose today, to come try and come here and get a big scalp in that regard.

“That’s coming in spades in the next year and it’s going to be great for us, for our mentality, going into the World Cup.”

Farrell also welcomed the intense challenges that Ireland’s much-vaunted attack faced. The Springboks put it under intense pressure, the Fijians broke the game up repeatedly with penalties, and there wasn’t much opportunity to get into a flow against the Aussies either.

“Rugby is pretty simple,” said Farrell. “If you slow people’s ball down in many different ways, then you can make it a street fight and that’s exactly what they did. 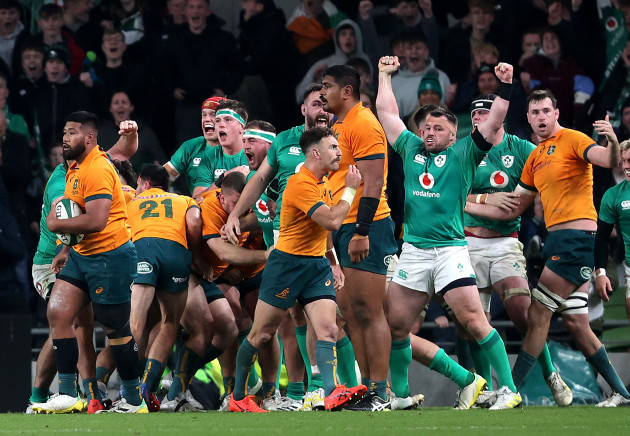 Cian Healy greets the final whistle in the Australia game.

“The breakdown area, I think it was ferocious. I don’t know if the officials quite knew what was going on really at times because they made it that way, and fair play to Australia.”

And then there are the question marks around the make-up of Farrell’s squad. He was disappointed with the effort from Ireland A against the All Blacks XV at the start of this window, as many fringe players’ World Cup hopes took a dent.

Farrell also voiced his displeasure at the display against Fiji after nine changes to the starting XV.

That said, there were players who pushed forward notably and though Farrell knows injuries will dictate plenty when it comes to picking a 33-man World Cup squad next year, he feels he knows more about his wider group.

“I don’t think we’re ever going to get the clarity because there’s always going to be moving parts anyway. Knowing the people, knowing the personalities, knowing the character is very important for us.

“So therefore we’ve got a much better opinion going forward.”

Farrell will be in France this week on a World Cup recce mission, having attended the World Rugby awards last night in Monaco, so there’s not much time to sit around with the feet up. It’s onto the next thing, although Irish did pause for a breather on Saturday night.

“You’re kicking the shite out of each other in training and turning up for each other at the weekend,” said Porter before the post-match reception in Dublin.

“It’s important to enjoy those moments off the field.

“It kind of builds those connections with players you might not know as well. It’s important as a team to share a beer in the changing room afterwards and take it all in, especially for the lads new into the squad. Hopefully, it gives them hunger to stay in the squad now because competition is incredibly high.”