Post-consumer recycled plastic is finally gaining the value it should have gotten long ago, due to its environmental friendliness compared to virgin material

But not everyone who benefits from this wonder material knows that plastics production requires huge amounts of energy, most of which is generated by burning fossil fuels. Plastics plants are also a source of harmful pollutants including benzene.

Nor do all consumers appreciate the extent to which plastic waste is polluting the natural environment. Microplastics (fragments no larger than a fifth of an inch, 5.08mm) have been found in soil, in snow high above sea level and even in bottled drinking water. These pieces often break down even further, into particles known as nanoplastics, which are so small they can penetrate human organs and tissues. 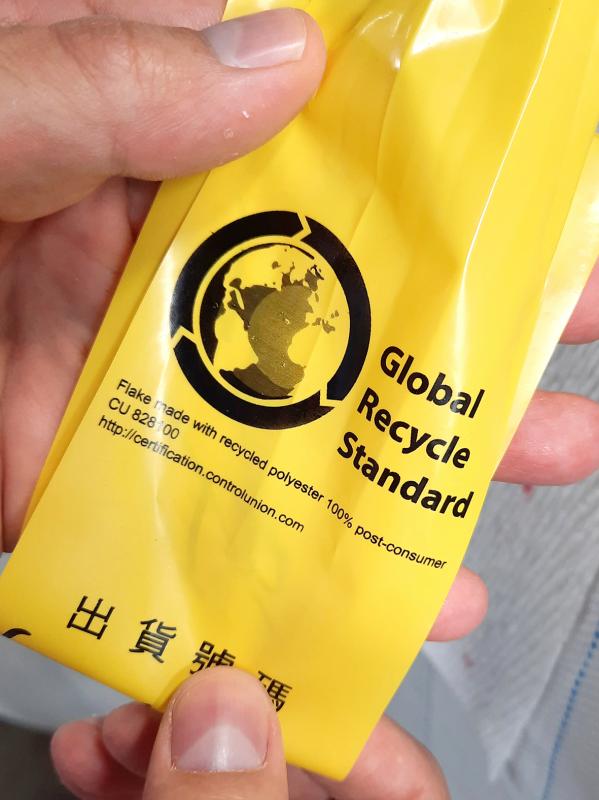 Taiwan’s Environmental Protection Administration (EPA) is trying to wean the public off single-use plastics such as drinking straws and disposable cups. They’ve had some success, yet no one expects the daily torrent of discarded plastic to slow to a trickle anytime soon. 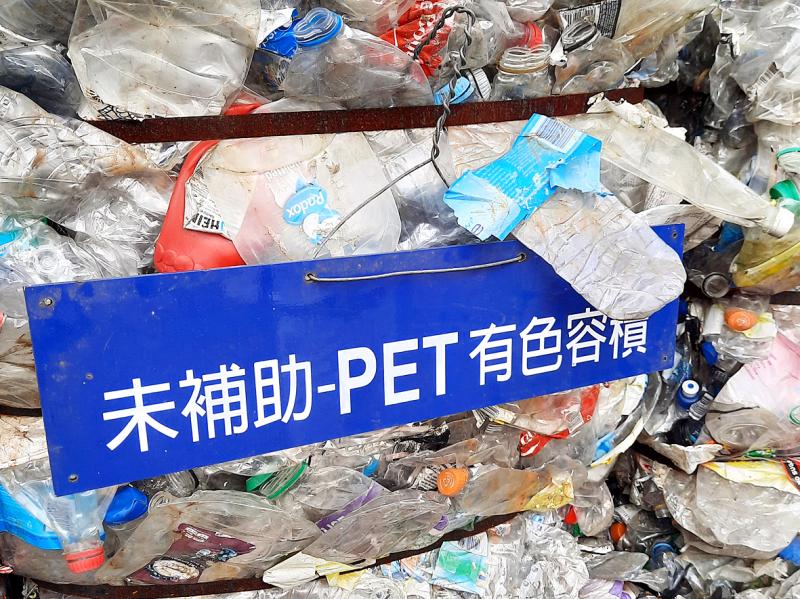 Plastics are derived from petroleum, so the cost of virgin material rises and falls along with the oil price. In the past, this meant that, whenever oil was cheap, companies would shun post-consumer recycled (PCR) plastic, preferring virgin plastics because their quality is higher. When the oil price was high, recyclers’ costs went up, but demand for their output rose, due to virgin plastics becoming more expensive compared to PCR plastics, explains Philipp Moede, business development manager at Remondis Taiwan Co.

Remondis Taiwan is a subsidiary of Remondis Group, a German company that provides recycling and other services in more than 30 countries around the world.

In the past few years, however, the value of recycled plastic has decoupled from the oil price. Because major brands are adopting strategies for sustainability, post-consumer recycled plastic is finally gaining what Moede calls, “the value it should have gotten long ago, due to its environmental friendliness compared to virgin material.” 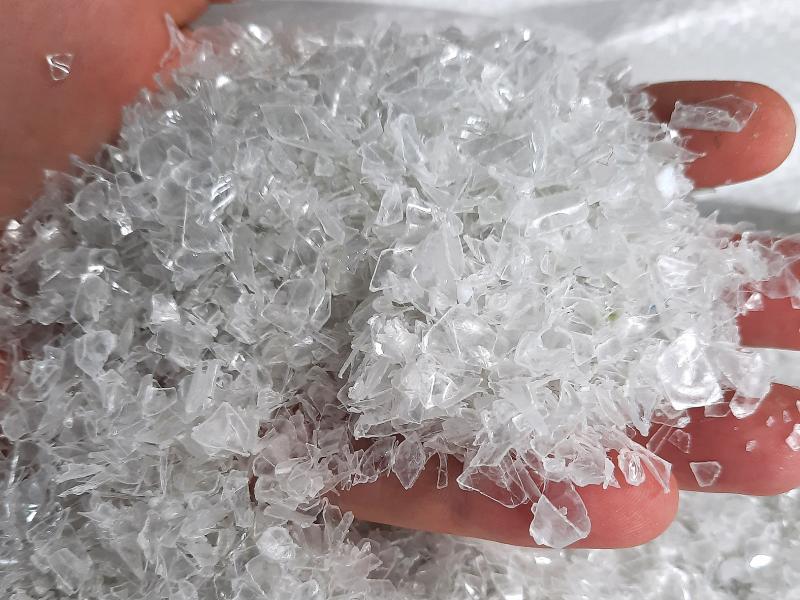 Back in 2018, Nike said that 75 percent of Nike-brand shoes and apparel contained some recycled material. Patagonia has been recycling plastic bottles into jackets for more than 20 years.

Moede describes Taiwan as “a special case,” because the country has a large and long-established textiles industry eager to use PCR plastic.

“Those companies want to buy as much PCR as possible, and we certainly don’t have enough PET bottles to satisfy their hunger for recycled plastic,” he says. 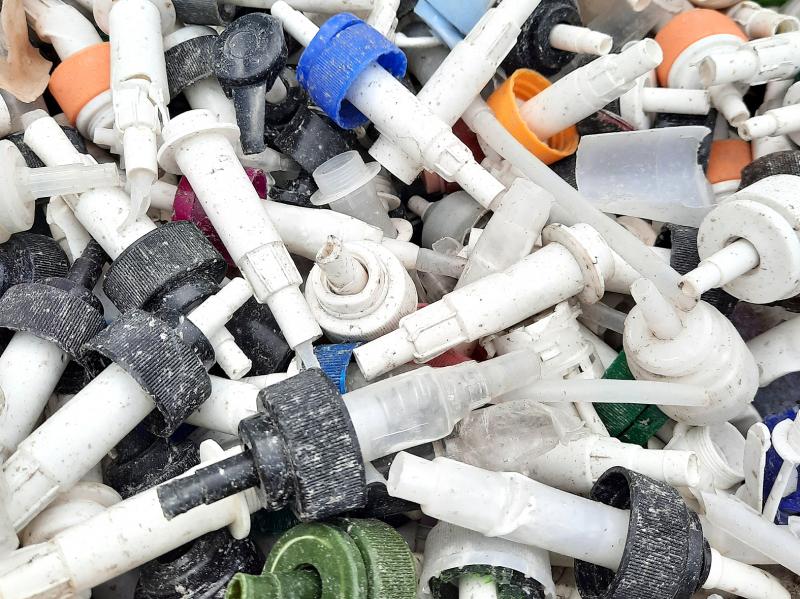 By weight, PET accounts for 49 percent of the plastics handled by the company’s plant on the outskirts of Nantou City. Most of the rest is PE (34 percent) and PP (13 percent).

Demand from local textiles enterprises is especially important, because regulations don’t allow recycled material to be used in the manufacture of food containers that’ll be used within Taiwan. In the US and India, recycled plastic in food packaging is permitted on a case-by-case basis.

Because they’re valuable commodities and easy to handle, there’s no need for the government to incentivize the recycling of paper and metal, says Jimmy Hu (胡志明), Remondis Taiwan’s vice general manager. However, Taiwan’s impressive recycling rate for plastics (95 percent in the case of collected PET containers, according to a Jul. 31, 2018 Executive Yuan press release, but significantly lower for other types of plastic) depends on EPA oversight of a system that collects fees from manufacturers – an example of what the OECD describes as Extended Producer Responsibility (EPR).

This money is channeled through companies like Remondis Taiwan to collectors who dispatch truckloads of plastic waste to recycling plants, of which there are more than a dozen around the country. These collectors use the cash to purchase recyclables from neighborhood scavengers.

Each time a delivery is made to Remondis Taiwan’s Nantou plant, an EPA representative unbundles the bales. If they find an unacceptably high level of impurities – ordinary trash mixed in with recyclables, for instance – they’ll withhold part of the subsidy.

Moede describes this as a “strict and labor intensive, yet necessary step,” to ensure dealers in recyclables don’t engage in dishonest padding.

“We process almost all the containers which you’ll see in a supermarket or a convenience store. The only limit is size. We can’t process anything bigger than 17 liters, ”Moede says.

In addition to beverage bottles, shampoo and lotion bottles, and clam-shell boxes, the plant can process the circular lids of takeaway soup containers – but not bento boxes (they’re made of a special cardboard coated on one side with a plastic film ), bags, plastic wrap or straws. Nor do they recycle optical media such as CDs. According to Hu, certain larger items, among them food trays, helmets and motorcycle body shells, fall through gaps in the current recycling ecosystem.

In a typical year, 25,000 tonnes of used plastic arrives at the Nantou plant from all over Taiwan and its outlying islands, and approximately 20,000 tonnes of PCR plastic flakes leaves the site. Impurities – metal rims on certain types of container, glue behind labels and organic material – account for the difference between these two totals.

Despite improvements in recycling technology, and manual sorting by employees, the percentage of plastic recovered compared to the weight of materials trucked in has declined slightly. Because PET bottles are thinner than before, the proportion of non-recyclable elements is greater.

Recycled flakes can be sold for at least NT $ 30 per kg, and Moede expects demand will push up this price. There’s a ready market for retrieved metals, but other leftovers like labels and treated wastewater end up as a sludge that has to be dehydrated and incinerated.

Since 2016, this has become a huge expense for Remondis Taiwan, Moede says. Taiwan’s trash incinerators now charge more than NT $ 9,000 per tonne to handle sludge. This is more than triple what it costs in Europe, and as expensive as disposal in a hazardous waste incinerator in Germany, he says.

When the company’s new facility, currently under construction in Changhua County’s Fangyuan Township (芳苑), becomes operational in 2024, this waste won’t be a liability. Instead of having to pay for it to be incinerated, it’ll be upcycled into a commodity called solid recovered fuel (SRF).

SRF’s high calorific value, low moisture content and controlled quality means it can be burned in boilers as a replacement for fossil fuel.

Compared to Taiwan’s municipal incinerators, which are less than 20 percent efficient in terms of generating electricity by burning trash, SRF offers energy conversion efficiency of up to 40 percent. Using SRF will also reduce Taiwan’s dependence on energy imports, Moede says.

Recycling plastic not only keeps it out of landfills and garbage incinerators, but also reduces the amount of greenhouse gas entering the atmosphere. According to data presented by Moede, producing 1kg of virgin PET generates more than four times the amount of carbon dioxide compared to 1kg of recycled PET.

If recyclers have access to renewable energy to offset unavoidable carbon emissions, plastic could soon become, if not carbon neutral, then very close to it, Moede says. In terms of power and water consumption, the Fangyuan facility will be significantly more efficient than the Nantou plant.

At its Nantou site, the only chemical input is alkali, for washing used plastic. The plant gets through around 250 tonnes of water per day, some of which is heated to high temperatures. This not only cleans the plastic, but also helps bottles return to their original uncrushed shape, making the removal of labels easier.

Consumers needn’t wash PET bottles before putting them in the recycling bin, Moede says. However, he urges good citizens to clean out any food scraps (including yogurt and tapioca pearls) before disposing of their recyclables, as organic matter complicates wastewater treatment.

Better communication between the authorities, recyclers and manufacturers would help boost the recycling rate and bring Taiwan closer to a truly circular economy, says Moede.

Plastic goods should be designed with recycling in mind, he says.

“We recyclers have to be involved from day one. The manufacturers must realize they’re not producing only for the consumer. They’re also producing for the recycler. “

Steven Crook, the author or co-author of four books about Taiwan, has been following environmental issues since he arrived in the country in 1991. He drives a hybrid and carries his own chopsticks. The views expressed here are his own about him.

Comments will be moderated. Keep comments relevant to the article. Remarks containing abusive and obscene language, personal attacks of any kind or promotion will be removed and the user banned. Final decision will be at the discretion of the Taipei Times.